Posted by davidbonnici in Facebook, Social Media on March 21, 2011

Holden has embarked on a widespread social media campaign during the launch of the new Australian-built Cruze.

Cars are excellent products for social media marketing as they attract passion and fierce brand loyalty. Manufacturers can also take different marketing approaches to suit their various models and the kinds of people who buy them.

Holden has recognised the importance of social media for some time and recently embarked one of its biggest online campaigns to market the launch of the new Australian-built Cruze across YouTube, Facebook and Twitter.

Leading the charge is the company’s Social Media and Digital Communications Manager, Andrea Matthews, who says social media is now a key component of Holden’s product launches. “There’s strong consideration for social media across everything we do.” says Matthews. “But you won’t see us “doing social” just for the sake of it. It has to fit with the campaign and the customer.”

While Holden has a large social media presence and following, with almost 175,000 Facebook followers on its main site, Matthews admits the company is still coming to grips with the opportunities social media offers to its marketing efforts and ways to provide customers added value.

One thing the company does seem to recognise is that social media marketing needs to be, well, social, meaning there needs to be a balance between a carefully planned social media campaign and genuine public engagement. “We’ll time our Facebook/YouTube/Twitter updates so that colleagues know where they appear in the overall plan, but we don’t script our interactions too much,” says Matthews. “It can make the updates far too stilted and not at all natural.

”I feel our social media activity has already moved a long way from just “broadcasting” what we want people to hear.

“We’re listening too, and that’s a strong message.”

When marketing a brand with so many devotees like Holden, getting a strong response via social media is the easy part, but are there any drawbacks?

“Holden has always been a social brand and with such a strong fan base. That has definitely played in our favour, but it is not without its challenges,” admits Matthews. “With such a rich motoring heritage, we have fans who for whom Holden equals high performance V8s only. We also have fans at the other end of the spectrum who drive our small cars and are equally passionate about them. That’s quite a demographic range to reach in a single forum like Facebook.

“That’s one of the reasons we established a stand alone Facebook page for our small car lovers, to give them a place to share their enthusiasm outside of the V8/historic car discussions which were taking place on our brand Facebook page.”

While social media is proving successful for Holden, Matthews says it’s difficult to accurately gauge its performance within individual marketing campaigns. “That very much depends on the objectives you set for the campaign,” she says. “If the objective is around building product/brand awareness and purchase consideration then it can’t be isolated from all of the other things we do as marketers and communicators.

“I’m also not sure that I’m keen on the idea of stand alone social media campaigns – we consume media and messages in so many different forms that social can’t sit on its own. To be used most effectively, it needs to be fully integrated with all of the other brand/customer touch points.”

Finally, if she had to choose just one social media platform to promote Holden’s brand which would it be? “It would have to be Facebook, because everyone is there,” says Matthews. “And with the changes to Facebook, I think brands have got a greater opportunity to build out their content.

“In fact, I think we’re really just learning what opportunities it offers to us and our customers.”

As the world gets smaller, we all get to share more big thinking.

It doesn’t get any bigger than the American Museum of Natural History’s launch of Dinosaurs :IPad.

Released to coincide with the holiday season, the app is something of a new media experiential coup. Extending, as it does, the thrill of discovering the Museum’s collection to a global audience.

Featuring over 1,000 high-res images, the app not only delivers to subscribers fast access to all the facts. It also enables real-time chats with other dinosaur lovers at home or even on an exploratory dig.

The really great thing is, this app doubles as a stunning advertising & PR device for the Museum’s forthcoming “The World’s Largest Dinosaurs” exhibition. Imaginatively created, to focus on a group of dinosaurs that lived for over 140 million years.

Given the popularity of the baby elephants at the Melbourne Zoo, a Jumbo app could be a timely addition in the very near future.

Fluevog a step ahead of social media trends

Posted by davidbonnici in Facebook, Shopping, Social Media on December 10, 2010 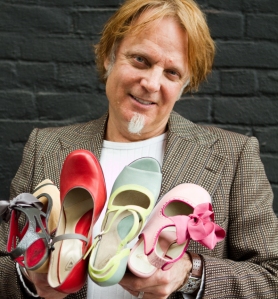 John Fluevog's quirky style is evident in his online marketing.

John Fluevog Boots & Shoes Ltd is one of a growing number of companies which are known by their social media campaigns as much as they for their product.

The relatively small Canadian footwear company claims its sales rose 40 per cent in 2009, the first full year of its social media campaign that includes a popular Facebook page and interactive website.

Encouraging customer feedback is a big part of the Fluevog’s social media strategy as is holding online votes about new shoe designs to see which ones get produced.

More importantly John Fluevog Boots & Shoes has identified its young and hip target market and pitches to in a way so they not only want to buy the shoes, they’d want to work for the company.

The Facebook page is active and not just a fan-site that people “Like” and forget. Staff contribute with information, competitions and light-hearted banter while receiving feedback in way of product reviews and the sort of fan mail and pics you’d see on band Facebook pages.

The company website is much the same and takes the user beyond product information to make it a fun online destination in its own right. You can design an ad to win $1000 or vote for other entries; download iPhone wallpaper and take part in its Opensource Footwear scheme, where user ideas lead to shoes designs. In other words it’s encouraging people to send in their creative ideas for no reward other than possibly seeing them incorporated in a finished product – this is the most popular page on the website.

Most importantly customers can purchase boots and shoes online, which at the end of the day is what the whole campaign is about.

Interestingly, Stephen Bailey, who oversees marketing and social-media at John Fluevog Boots & Shoes says the company doesn’t invest in paid advertising in social media. However, his own work has shown, an effective social media campaign does need a certain amount of investment in time and creativity, which can pay off with a loyal client base.